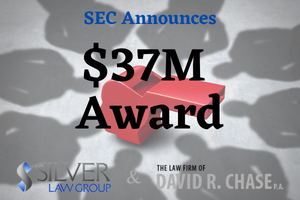 In one of the largest bounties awarded to a single whistleblower, the SEC in conjunction with another federal agency awarded a total $37 million to a whistleblower for information that led to two successful enforcement actions.

The SEC, along with another federal agency that was not named, as well as the company at the heart of the investigation worked together for the successful covered and related enforcement actions. The whistleblower reported the activity to the SEC within 120 days of providing it to the company, leading to eligibility.

The award was made in two parts: the SEC awarded a bounty of more than $29 million, which was equal to a percentage of the monetary sanctions collected in their covered action. The other agency awarded a bounty of additional $8 million for a related action. The Claims Review Staff (CRS) found the individual eligible for whistleblower award and recommended that the Commission waived its timing element of the first requirement.

It’s important to note that this whistleblower is an outsider to the company, not an employee. During the investigations, the whistleblower submitted multiple anonymous tips to both the company and to the SEC. The covered actions include allegations of misconduct that was much more extensive than the whistleblower reported in the tips. Therefore, a big percentage of the monetary sanctions ordered against the company were related to activity that was not covered by the whistleblower’s information.

The CRS also recommended denying awards to two other claimants who did not submit requests for reconsideration.

Silver Law Group and the Law Firm of David R. Chase jointly have experienced SEC whistleblower lawyers, including a former SEC Enforcement attorney on the team, so you will always have guidance throughout the process. Our SEC whistleblower attorneys can help you if you have information regarding securities or investment fraud, violations of federal securities laws, false filings, market manipulation, or other misconduct. You must provide timely, credible, and original information or analysis in order to be eligible.