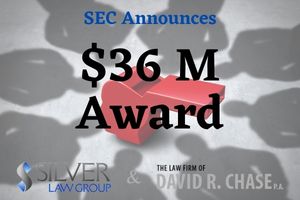 On September 24, 2021, the Securities and Exchange Commission (SEC) announced that it awarded roughly $36 million to a whistleblower who provided information and assistance that “significantly contributed to the success of an SEC enforcement action as well as actions by another federal agency.”

The other agency was not named, and limited information was provided in order to protect the identity of the whistleblower.

According to the SEC’s press release, the whistleblower gave information on an illegal scheme that was crucial to the government. The whistleblower met with the SEC’s and the other agency’s staff multiple times and identified “key documents and witnesses.”

As of this writing, the SEC has awarded about $1.1 billion to 214 people since it first issued an award in 2012. Whistleblowers are not paid with money from harmed investors, but from sanctions paid to the SEC by violators of securities laws.

Whistleblowers can provide a valuable public service by notifying the authorities of harmful conduct, while also earning financial compensation for themselves. Working with experienced whistleblower lawyers can increase your chances of the SEC initiating an investigation based on your information.

If you wish to remain anonymous, you must be represented by an attorney, who will submit everything on your behalf.

Silver Law and the Law Firm of David R. Chase jointly have experienced SEC whistleblower lawyers, including a former SEC Enforcement attorney on the team. Our SEC whistleblower attorneys can help you if you have information regarding securities or investment fraud, violations of the federal securities laws, false filings, market manipulation, or other misconduct.

You must provide credible and original information or analysis that leads to a sanction of $1 million or more to be eligible to receive an award. Whistleblower may receive between 10% and 30% of the money collected.

Contact us through our online form or at (800) 975-4345 for a no-cost consultation. We work on a contingency fee basis, which means it costs nothing to hire us, and we only collect fees when you receive an SEC bounty. Since we only get paid when you do, we have the incentive to help you collect the maximum award.