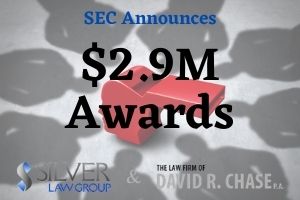 The SEC’s Office of the Whistleblower recently awarded two individuals a total of $2.9M in payments after alerting investigators to improper conduct in two separate cases. In a press release dated February 19, 2021, the SEC announced two awards:

Jane Norbeg, Chief of the SEC’s Office of the Whistleblower stated: “Both whistleblowers who received awards today raised their concerns internally and then timely reported those concerns to the Commission. The return of millions of dollars to harmed clients in one matter, and the uncovering of a fraudulent scheme in the other matter, underscore the tremendous value that whistleblowers provide.”

At Securitieswhistleblowerattorneys.com, our attorneys have seen a rise in SEC whistleblower awards over the last few months which focus on the ongoing help and assistance provided by the whistleblower.

Who Provides This Information To The SEC?

The SEC’s process begins when someone notifies the agency of a potential wrongdoing, and the investigative process is implemented.

The funds for these awards does not come from the recovered monies of the investors. The money paid to whistleblowers is taken from a fund established by Congress and funded with financial sanctions paid to the SEC by those who violate securities law.

These awards are paid to those whistleblowers whose information leads to actions in which there are $1M or more in sanctions. The whistleblowers are paid between 10% and 30% of the monies collected in each case.

Tips That Lead To Awards

Since the inception of the SEC’s Office Of The Whistleblower in 2011, over $700 million has been awarded to individuals after tips that led to enforcement actions. These actions have also resulted in $2 billion in financial remedies for defrauded investors.

The identity and identifying information about each whistleblower is kept confidential to protect against any type of retaliation. Company and employee information for the entities involved is also kept out of the press release and the public domain to protect the whistleblower.

You can read more about the SEC’s Office of the Whistleblower on their website, including the 48-page OWC annual report.