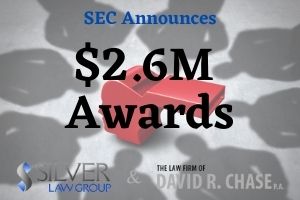 Even though the individuals made the report more than 120 days after reporting it internally, they were still eligible for an award because they satisfied the 120-day exemption. The first whistleblower received the largest award because they provided information and assistance that ensured the success of the enforcement action. Two of the three provided ongoing assistance during the investigation and enforcement action.

From the order: “Claimant’s information, including a comparison of the language in touting emails with emails in other promotional campaigns, was the product of unusual effort and expertise developed over many years and helped establish the connection between the Company and previous or ongoing promotional campaigns that were suspicious in nature.”

This analysis included identifiable patterns from publicly available information that helped the SEC identify wrongdoing immediately, put a stop to it, and safeguard assets in the process. This individual had expertise and years of industry-specific experience that led to the analysis. Their “timely identification” of the company in question helped the SEC staff secure assets and bring the enforcement action.