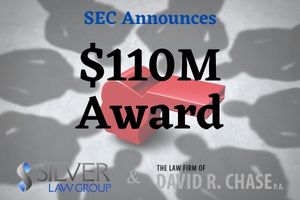 In one of the highest payouts since the inception of the SEC’s Whistleblower Program, an individual recently received a total bounty of an astounding $110M. It’s the second highest award paid to a whistleblower, following a $114M award paid just last October. The SEC awarded the individual $40 million, and the other agency paid $70 million for a related action.

This brings the SEC’s Whistleblower program’s total awards to the $1 billion mark since 2012, and payments made to a total of 207 individuals. In FY2021 alone, the SEC has paid out over $500 million in whistleblower bounties. These come from financial sanctions collected from wrongdoers, such as civil penalties and disgorgement, not from money recovered on behalf of defrauded investors.

The whistleblower provided information from “significant independent analysis”  that greatly assisted both the SEC’s staff and the second agency in their investigations.

In the same press release and order, the SEC announced that a second whistleblower received a bounty of $4M after supplying information that was “much more limited” and provided after the beginning of an investigation.

The reason for such a high-dollar bounty in this case is that the first claimant received an additional award for a “related action.”

When another regulatory or governmental agency brings an action against a company concurrent or in conjunction with the SEC, it’s called a “related action.” If the agency also has a whistleblower program, it’s possible for a whistleblower to be awarded an additional bounty as this one had.

Related actions can be brought by:

Whistleblowers can find themselves eligible for more than one bounty, as was the case in today’s press release.

As always, identifying information is kept confidential to protect the identity of the whistleblowers.