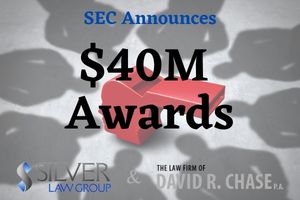 Through three orders, the SEC issued awards to four people that totaled over $40 million.

While many people who decide to become whistleblowers receive eye-watering amounts of money, they frequently experience hardships because of speaking out long before receiving a bounty.

Many believe that by reporting the misconduct and/or fraud, their supervisors or management would take them seriously and seek corrective action. Unfortunately, that’s not always the case, especially when there is a breakdown in trust between an employee and their manager, supervisor, or company.

One of the most common hardships is retaliation, which can come in any number of forms:

Even though the law prohibits retaliation and protects whistleblowers, many will suffer hardships on the way to the conclusion of a case.

A whistleblower’s identity may be inadvertently revealed even if he or she reports the misconduct anonymously.

Silver Law and the Law Firm of David R. Chase jointly have experienced SEC whistleblower lawyers, including a former SEC Enforcement attorney on the team. Our SEC whistleblower attorneys can help you if you have information regarding securities or investment fraud, violations of federal securities laws, false filings, market manipulation, or other misconduct. You must provide timely, credible, and original information or analysis in order to be eligible.

Contact us through our online form or at (800) 975-4345 for a no-cost consultation. Our attorneys work on a contingency fee basis. This means that it costs you nothing to hire us, and we collect our fees when you receive an SEC bounty. Because we get paid when you do, we have the incentive to help you collect the maximum award available.