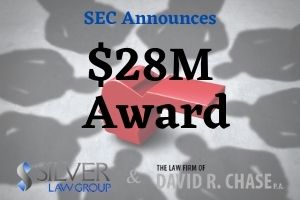 The SEC today awarded a whistleblower a sum of $28M after providing the SEC with information that led to a successful enforcement action and a second related action with another federal agency. The second agency was not identified.

As a result of the informant’s information, both the SEC and the second federal agency made the decision to open and pursue individual investigations. Because of the second related action, the informant was also eligible for another award brought about from the initial SEC investigation and enforcement action.

“The SEC has awarded more than $900 million over the life of the program, including almost $85 million to nine individuals in this month alone, which reflects the vitality and continued success of the SEC’s whistleblower program,” said Emily Pasquinelli, the current Acting Chief of the SEC’s Office of the Whistleblower.

The agency has awarded an astonishing $901 million to 163 individuals since the program began in 2012, with no signs of slowing down.

The Process Of Receiving A Whistleblower Award

The SEC is close to the $1 billion mark for giving awards to people who decided to speak up. The largest awards so far has been a whopping $114 million for a single case in October of 2020.

A tipster can receive from 10% to 30% of the proceeds of financial sanctions from a successful enforcement action when the total exceeds $1 million. That includes the fines and other monies collected from the companies and people involved in fraud or other actions. Awards are NOT taken from any investor funds, which are returned to the investors.

You may be wondering how whistleblowers suddenly find themselves on the receiving end of eye-watering amounts of money as an award for information. Unlike buying a lottery ticket, there is considerable activity before someone receives this kind of award and we hear the news.

When the individual observes misconduct, it’s up to them to not only report it internally to their company if possible, but to let the SEC know as well. These can be employees, executives, investors, customers, or anyone who has firsthand knowledge of wrongdoing.

The first step, is, of course, submission. An individual must submit their tip online through the SEC’s online portal, or send their TCR (Tips, Complaints & Referrals) via mail or fax to the SEC’s Office of the Whistleblower. Once received, the information is sent for analysis and investigation.

If the information leads to a successful investigation and enforcement action, the notices of these covered actions are posted publicly. The whistleblower then has to file a claim to request an award, which is undergoes a analysis and investigation process. Preliminary determinations are then issued.

Should there be a conflict in the determination of an award, the whistleblower can then file an appeal and request a reconsideration. After additional review, the agency issues a final determination, and if the agency agrees, an award is issued.

The process can take years. The SEC alone receives thousands of tips that must be investigated individually. Sometimes, as in this case, a different federal agency becomes involved, and a whistleblower may receive an additional award from the related enforcement action.

Whistleblowers can be assisted by legal counsel, and are allowed to submit information anonymously if they are. Having an attorney can make the process easier, and increase your chances of having your information investigated, and possibly lead to an award at the end.