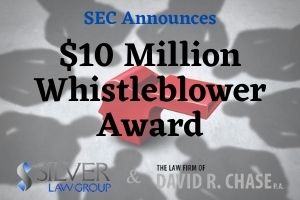 On October 29, 2020, the SEC (Securities and Exchange Commission) announced that it had awarded more than $10M to a whistleblower who provided original information that prompted an investigation.

The Chief of the SEC’s Office of the Whistleblower, Jane Norberg, noted that the whistleblower took other measures before going to the SEC. “After reporting internally and receiving no satisfactory response, the whistleblower alerted the agency to the securities violation and played a critical role during the investigation,” Norberg said.

The whistleblower chief went on to say that this award shows how important whistleblowers are to investigations and helping the SEC save time and money.

The identity of the whistleblower, what the investigation concerned, and who was sanctioned are not known. That’s because the SEC withholds information that could identify whistleblowers to protect them from personal and professional retaliation.

The SEC whistleblower program was created in 2010 with the Dodd-Frank Act. The first whistleblower award was in 2012. Since its inception, awards paid to whistleblowers have been increasing in size.

In October, a $114 million award was announced, which is the highest in the history of the program. That award was more than double the next biggest award of $50 million, which was also made in 2020. The SEC ended a record-setting fiscal year in September, 2020 with $175 million awarded.

As of this writing, the SEC has awarded approximately $719 million to 112 individuals.

To be eligible for a whistleblower award, original non-public information must be provided that leads to a successful enforcement action. If the sanction is more than $1 million, the whistleblower may be awarded between 10% and $30% of the recovery.

Though an attorney is not required to submit a whistleblower complaint, the SEC recommends that individuals speak to a whistleblower attorney. Doing so may give the whistleblower the best chance of getting the biggest award and help them to protect their identity and avoid retaliation.

Our experienced SEC whistleblower attorneys can assist you if you have information regarding securities or investment fraud or other illegal conduct. The SEC considers cases involving fraud and violations of the federal securities laws, including market manipulation, Ponzi schemes, and false filings.

Our lawyers have filed multiple SEC whistleblower claims. Our clients include Wall Street insiders, retail investors, and others who have information concerning fraud and want to step forward to protect others. Our experience representing whistleblowers is priceless and provides an advantage when helping potential whistleblowers.

We are prepared to investigate your potential complaint and take the actions appropriate for your goals. Contact us at (800) 975-4345 or through our online form for a no-cost consultation with an attorney. Our attorneys work on a contingency fee basis and are incentivized to maximize the recovery for the whistleblower.